How to Protect Your Small Business with Cyber Security: 3 Things You Need to Know 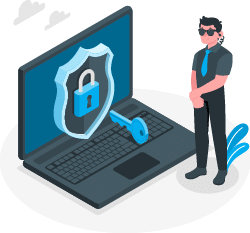 And you rely on the Internet for it to survive and thrive.

But it’s a fact that 43% of cyber attacks are on small businesses. Each attack causes business damage, disruption and cost.

When you’re not a security expert, it’s hard to know if you’ve got enough protection for your business. Well, there are 3 key things you need to know to keep your business safe:

1) Start with Antivirus: But It’s Not Enough

Antivirus is like the medicine you take to treat an illness.

It’s simply software which finds and removes computer viruses. The most basic type of defence for your business.

Antivirus is inbuilt to Windows and Mac computers. However, they have to be set up individually on each laptop or desktop. They also rely on you spotting security alerts and doing something about them.

As a result, there’s a risk that the virus infects your computer and you don’t notice before it damages your equipment or your data.

That’s because the antivirus software providers work like medical researchers. They use a sample of the virus to create a treatment. So antivirus providers have to wait until a system is infected and exploited before they can get a sample of the code and learn how to tackle it.

Antivirus’ drawback is that it reacts to something that’s already happened. Like with medicine, you’ll still catch the illness and you need to spot that something’s wrong to treat it.

But hackers create new tools and techniques all the time. So an attack can go unnoticed by antivirus software for weeks or months.

As Chris Sherman from technology analysts Forrester says, “One of [AntiVirus] AV’s biggest downfalls is the fact that it is reactive in nature; accuracy is heavily dependent on whether the vendor has already seen the threat in the past. Heuristics or behavioral analysis can sometimes identify new malware, but this is still not adequate because even the very best engines are still not able to catch all zeroday malware.”

It’s still important to use antivirus software, but by itself, it’s not enough to keep your business secure.

2) Keep Intruders Out With a Firewall

They can deter unwelcome intruders and prevent harmful traffic from entering your network.

But they don’t protect you against every type of threat.

As with antivirus, many laptops and desktops come with a default firewall installed. They’re a longstanding defence against external security threats.

Basic firewalls allow or deny communication using limited information and static rules. They spot whether a particular network connection belongs to a blacklist. If this is the case they block it.

But this means your firewall provider has to wait until an attack is launched to analyse its traffic. In fact, many cyber attacks are effective because businesses assume that they’re safe on their own networks behind a firewall.

Firewalls are useful protection to have in place, however a strong network needs more than one level of security.

As Lawrence Pingree, a Gartner analyst, said, “The reality is that no one security technology is enough. Hackers are always working to defeat the latest defense. So you have to invest in defenses for the latest threat as well as every threat experienced in the past.”

Prevention is better than cure.

Even with modern medicine, doctors still say that it’s better to avoid getting an illness rather than having to treat it.

That’s the idea behind content filtering. To stop attacks on your business before they even start. As a result, it’s often seen as the first line of defence.

Website links are checked and if they’re malicious you’re blocked from accessing it. This helps to prevent the download of malware onto your devices.

Content filtering uses a constantly updated database of security threats. For example, Cisco has a research team called Talos. It’s one of the largest commercial threat intelligence teams in the world.

Their researchers, analysts and engineers analyse Internet traffic all day every day.  This feeds into Cisco Umbrella which makes it the most up to date source of malicious and suspicious activity.

That’s why we use Cisco Umbrella within the Small Business Security Shield. Because it helps us to protect small businesses from cyber attacks before they happen.

Defend Your Small Business with Layers of Security

There’s a huge amount of knowledge, but there’s much that’s new and unknown.

Doctors use a combination of drugs and treatments to tackle illnesses. Because it has the best results. In the same way, you need to use several security tools to protect your business.

Malware created some time ago still poses a threat. Firewalls and antivirus software can give you some protection against these attacks.

But relying on a single security measure only gives you limited protection.

It’s also important to invest in a first line of defence that prevents new and emerging threats from reaching your business. Content filtering is a powerful tool that compliments antivirus and firewall protection.

So protect your small business with layers of security. Antivirus, firewalls and content filtering all play a part to keep your business safe.